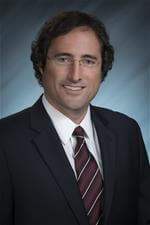 Dr. Patrick O’Neill is the only board certified fellowship-trained foot and ankle orthopedic surgeon in Sarasota County. He completed his fellowship in foot and ankle surgery at the Johns Hopkins/Union Memorial Hospital program in Baltimore, MD, where he studied with nationally and internationally renowned surgeons.

After earning his medical degree at Johns Hopkins University School of Medicine, Dr. O’Neill completed his orthopedic training at the Johns Hopkins Hospital, Union Memorial Hospital, and University of Maryland Shock Trauma Center in Baltimore. He received his undergraduate degree in bioengineering from Syracuse University.

Dr. O’Neill is board certified and highly trained in the latest non-surgical and surgical treatments for a wide range of disorders of the foot and ankle. He treats sports-related injuries, tendon disorders, foot and ankle trauma, diabetes, nerve disorders, rheumatoid arthritis and osteoarthritis, heel pain, bunions, hammer toes, and amputations. Any area of the foot and ankle may be involved, including the forefoot, midfoot, hindfoot, or ankle. Patients may have either simple common problems, or more complex problems that could require complicated reconstructive procedures.

During his training, Dr. O’Neill enjoyed research activities, and he received numerous awards for his work from the American Orthopaedic Foot and Ankle Society, Maryland Orthopaedic Association, and the Johnson & Johnson/Roger H. Michael foundation. His research has been published in peer-reviewed orthopedic journals, including Foot and Ankle International and the Journal of Bone and Joint Surgery, the most prestigious orthopedic journal.

While at Syracuse University, Dr. O’Neill excelled both on and off the playing field. Some of his academic accomplishments include Academic All-American and University Scholar, Syracuse’s highest honor. Dr. O’Neill was also a member of the Syracuse Orangemen football team as a punter and kicker, and he was ultimately named to the All-20th Century Football Team.

Upon leaving Syracuse, Dr. O’Neill was drafted in the 5th round of the NFL draft by the New England Patriots, and in his first year he was named the NFL All-Rookie Punter.