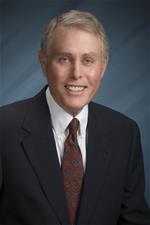 Dr. William R. Kennedy is board certified by the American Board of Orthopaedic Surgery and a fellow of both the American College of Surgeons (FACS) and the American Academy of Orthopaedic Surgeons (FAAOS).
A graduate of Tulane Medical School, Dr. Kennedy completed his orthopedic residency at New York Orthopaedic Hospital, which is part of Columbia Presbyterian Medical Center in New York City. While there, he served as the Senior Annie C. Kane Fellow in Orthopedic Surgery and held a teaching appointment as a clinical instructor in orthopedic surgery at Columbia University’s College of Physicians and Surgeons.

Dr. Kennedy is a member of the Florida Arthritis Foundation Board of Directors. In addition, he maintains membership in the Florida Orthopaedic Society, American College of Surgeons, American Academy of Orthopaedic Surgeons, and the American Association of Hip and Knee Surgeons. He has also served as president and vice-president of the Society for Arthritic Joint Surgery.

In his free time, Dr. Kennedy enjoys spending time with his family and woodworking, especially if it involves boats. He is an avid sailor and in 1980, qualified for the Olympic final trials in the Star Class.